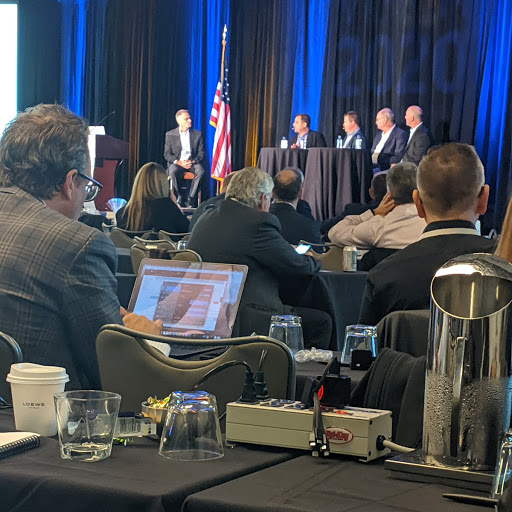 As the industry turns the corner toward what is forecasted to be a turbulent new decade, it can be argued that
leadership has never been more important. This year’s ECIA Executive Conference, held last week in Rosemont, just outside Chicago, had the theme of Vision 2020, Leading with Clarity. Chaired by TTI Inc’s Melanie Pizzey, the conference gave these executives the tools and insights required for visionary leadership into the 2020s. 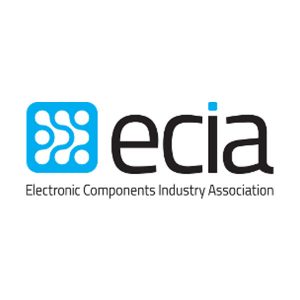 The first group of speakers focused on future trends. Tony Uphoff is CEO of Thomasnet, which has evolved over its 100-year history from an industrial directory and catalog into an online platform used by over 900,000 buyers. Tony’s presentation helped answer the question: what are industrial buyers looking for? The short answer: solutions. “Our buyers, roughly half millennials, half baby boomers, don’t want to buy a quarter inch drill. They want a quarter inch hole.”

Tony explained that companies need to sell the way the buyer buys. Buyers are more in control of the process than ever before, and 70% of the buyers’ journey is complete before they engage with the sales rep. If they go to a company’s website and don’t find exactly what they want, they will ‘ghost’ that company.

The type of companies that are sourcing components has changed as well, he said. Of the top 20 companies sourcing components on the Thomasnet platform, #3 is Facebook, and #18 is Cal Tech. That makes it harder to engage with buyers. Traditional advertising and marketing for lead generation have been rendered impotent, with search-based placements subject to bots and other types of manipulation. “Advertising fraud is an $18 billion crime,” he warned.

Economist Cliff Waldman gave attendees his global economic forecast. Cliff expressed concern about the slowdown in China but pointed out that it predated the tariff war. “China has an aging problem. The concern is, they will grow old before the middle class gets rich.”

Not that the tariff war isn’t generating uncertainty. “Populism is turning the global supply chain into many domestic supply chains. Different products have different elasticity of demand. Capital equipment
spending plunged in 2019, for example.”

ECIA’s own chief analyst Dale Ford brought the conversation back to the components industry. He focused on the historic cyclicality of the semiconductor industry, telling attendees how the process has evolved in the past 40 years. “The semiconductor cycles eventually became an important leading indicator for the general economy, so they are watched carefully. They last around four years, typically. This past cycle peaked in June of 2016 and has been on the downward slope since. It has bottomed out and we should see positive Q on Q growth in April/May of 2020.”

Ford continued with a discussion of ‘the next big thing’ for the industry. “There are three forces of the Technology Triumvirate: 5G, the Cloud and IoT. Driven by the Internet of Everything, this connectivity will be a need to have, not just something for the teenagers. Healthcare, transportation, industrial manufacturing, cities, energy… everything will be connected. 5G and the Cloud technology that is behind it is the gamechanger.”

What does it mean for components industry? Nearly every piece of electronic equipment will need to be adapted and/or upgraded, and that will drive the demand. There are substantial threats, however. “I call it ‘defense against the dark arts’ – cyber security is a daily headline now, to the point that I’m afraid we have become complacent. A survey from Cisco shows 60% of companies have no cyber strategy. Yet the losses mount up: $6 Trillion in 2021. Healthcare is a prime target of hackers. We have to solve this.”

ECIA CEO Bill Bradford took the podium to report on the State of the Association. “After a year of listening to members, conducting extensive strategic planning and consensus-building, now after the restructure, the organization is on solid financial footing, agile and well prepared to deliver value to its members,” he declared. “Our next projects include an update to the Texas A&M study quantifying the value of distribution; continuing all the good work of the GIPC and other projects promoting the industry and the authorized channel for electronic components.” He continued with a report on other activities of the association: ECIA Foundation, EIA Standards, and the ECIAauthorized.com inventory search site. He also announced a new communication vehicle for the association: The Channel Channel, a podcast series.

Next, he presented the North Star Award, the association’s highest honor, to Dave Doherty, Digi-Key Electronics.

Elena Richards is with Price Waterhouse Cooper. She spoke about diversity in a way that attendees likely hadn’t thought about it. Beginning with a moving video, she quickly turned the conversation to business imperatives: “You say talent is your most important asset? Whether the reason comes from the heart, the head, or the wallet, focusing on inclusion is the right thing to do. Diversity means how we count people, but it’s not how many we count, it’s making EVERY person count.”

Richards continued by explaining that there are 36 dimensions of diversity. “People don’t leave these aspects of who they are at the door when they come to work. They determine our thought processes and assumptions. Sometimes they are unconscious – what we call ‘blind spots.’” Talking about it and becoming more aware of how we see others helps us all get better. “Hold your ideas lightly and solicit different points of view. Keep your inner doors open. We all like to be right and we tend to listen for the confirmation. Turn that off and listen for things that challenge your assumptions.”

PwC has been focused on improving in this area since the new CEO was installed during a particularly difficult time of racial tension in the U.S. When one of their own employees was killed in his apartment by a policewoman who had entered his home by mistake, it was devastating to the organization. “We must collectively push our Boards of Directors to commit to addressing these issues in our companies.” So far 800 CEO’s have signed on to PwC’s CEO Action for Diversity and Inclusion initiative.

The next topic was a deep dive into the technology driving ‘intelligent transportation’. Dwight Howard of Aptiv has been part of the transformation of the driving experience through electronics since the beginning and spoke about the understated technical challenges that arise from next generation autonomous vehicles. There is little appreciation about the engineering challenges of Vehicle to Vehicle (V2V) and Vehicle to Infrastructure (V2I) communications, which will be essential for autonomous driving.

It will not be possible without widespread 5G implementation. The cybersecurity issues have not been solved. “The hardware that is being developed is more complex than a fighter jet,” he cautioned. “Silicon won’t cut it. Traffic monitoring will have a massive impact on data usage. It will have to be optical computing. To reach the full potential of connected vehicles will require investment, cooperation and partnership with public and private entities,” Howard concluded.

Following an afternoon break, attendees were treated to a provocative CEO panel discussion on ‘Where does organizational development fall on your priority list?’ Moderated by TTI’s Michael Knight and executive recruiter Carla Mahrt, this group included Gordon Hunter, Chairman of Littelfuse, Joe Nelligan, CEO of Molex, and David Kirk, President and CEO of Murata. They tackled topics like how to identify and nurture ‘high potential candidates.’ Packed with practical insights and real-life examples, these seasoned executives talked about their ex-pat programs, protecting their investment in valued employees and how to lead a global organization through leadership transitions.

The day ended with a presentation from Shawn Rhodes. ‘Pivoting for Performance’ instructed attendees on the challenge of change management, with reference to the components industry. Using riveting stories from his experiences in the military, Rhodes began his presentation with this frightening thought exercise: what would you do if you suddenly realized you had 15 minutes to live. This is what a commander told him right before a combat mission, and as a 19-year old Marine war correspondent, it quickly got Rhodes’ attention. Rhodes summarized the key principles of effective leadership during periods of change: “Training makes pivoting possible. There’s no getting around that fundamental truth. It must be part of the culture to find innovative solutions to problems and then never keep them a secret,” he emphasized. He went on to explain to attendees how to create a culture where seasoned veterans in the organization will want to give up their tribal knowledge to other team members.

No Shortcuts to the Top

Ed Viesturs, an author and professional mountain climber, opened the second day of the conference. Thanks to a sponsorship from TE Connectivity and TTI, Inc., attendees were captivated by the truly inspirational story of persistence, preparation, and patience – all qualities of good leadership. Ed climbed Mount Everest multiple times, as well as all 14 peaks over 8k meters, without supplemental oxygen. It was an 18-year journey: On May 12, 2005, he made it to the top of the last peak on his list, Annapurna, after attempting it twice before. He shared some insights from this remarkable feat. “Listen to the mountain and be patient. The journey must be a round trip. No matter how much you want to achieve your goals the safety of the team is paramount. We all have our own mountains, our own long-term vision,” he continued. “You must become comfortable being uncomfortable because there will be setbacks. Avoid ‘group think’. Keep going in the direction your team decides to go. Don’t look too far ahead, go one step at a time. It’s mind over matter. If you don’t mind, it doesn’t matter,” he quipped.

Next on the agenda was Graham Kilshaw of Lectrix Group who spoke on ‘Making the Cultural Shift from
Product Promoters to Problem Solvers.’ Coming full circle from the first presentation where Tony Uphoff pointed out that buyers want a quarter inch hole, not a quarter inch drill, Graham reported on the trendsmin marketing communications that will drive companies to change the way they go to market. Beginning
with the advent of voice search, he predicted that whatever is happening in the consumer space, will
quickly set expectations for industrial brands. “Voice devices have already penetrated the workplace,” he explained. That means that companies will have to be prepared for buyers to be able to access their products through a voice search that queries a problem. “New product introductions are still important; don’t stop doing that but embed that information in problem solving content,” he continued. “It’s jab, jab, jab with content about problem solutions, then right hook with your product.”

A thoughtful and frank Q&A with the ECIA Board and Council members followed. Each Council Chair
outlined their key initiatives and answered questions about future plans. Attendees were encouraged to
get involved and add their voice to solve industry issues.

Skip Weisman closed the conference with a stirring presentation on ‘How to Create Workplace
Conditions that Deliver Championship Results.’ After all, that is the main task of leadership in any
organization: to enable employees to do their very best. Using a personal case study, he explored the
assumptions and attitudes that were standing in the way of employee performance. He outlined a four-step program for success What people want is transparency and ownership. Your employees must perform when circumstances require them to, but those circumstances must be managed and tweaked to make sure they are optimized and customized to their unique skills and abilities.

This must-attend event attracts over 300 of the industry’s executives. Save the dates for the 2020
Executive Conference: October 25-27 at the Loews Chicago O’Hare Hotel.