As the pace of electrification accelerates in the global automotive market, and various governments worldwide implement subsidy policies that encourage consumer EV purchases, sales of new energy vehicles (NEV, which includes both BEV and PHEV) are continuing to rise as well, according to TrendForce’s latest investigations. NEV sales for 2021 are projected to reach 4.35 million units, a 49% increase YoY.

TrendForce indicates that electrification, smartization, and automation are the three key determinants of the ongoing transformation taking place in the automotive industry. Guided by these three determinants, not only are the strategies, business models, and competitions of automakers transforming, but the automotive supply chain is also changing and expanding. Upstream component suppliers and downstream manufacturers alike are now operating in accordance with new paradigms.

Now that the competition between traditional and emerging automakers in the NEV market is gradually intensifying, traditional automakers have begun releasing BEVs that are based on purely electric platforms rather than preexisting ICE vehicles. However, for the vast majority of mainstream automakers, NEV sales account for less than 10% of their total car sales. These automakers are therefore placing a top priority on expanding the lineup and sales volume of their NEV models. Emerging automakers, on the other hand, are instead focusing on expanding their production capacities, and Tesla as well as Chinese brands (including NIO and XPeng) have made their respective capacity expansion plans.

NEV sales currently account for only 5% of total automotive sales. As such, not only does the NEV market still have high potential for growth, but this potential has also attracted new players, which are mostly consumer electronics and IoT vendors such as Xiaomi and OPPO, to enter the market. Given their lack of competencies in developing and manufacturing whole vehicles, these companies are instead acquiring existing automakers or utilizing ODM services. Therefore, automotive ODM services are likely to ramp up going forward, while automakers and ODMs will continue building factories via joint ventures, sharing their technologies, and jointly developing NEV models. 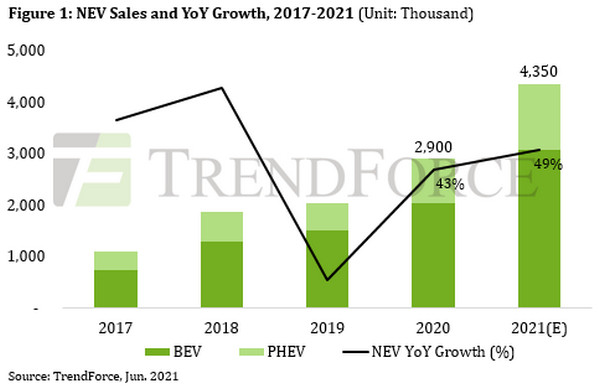 For additional insights from TrendForce analysts on the latest tech industry news, trends, and forecasts, please visit our blog at https://insider.trendforce.com/

Contract Prices of PC DRAM Expected to Decline by 0-5% in 4Q21 as Spot Prices of DRAM Modules Continue to Weaken, Says TrendForce