An abnormality which caused a power outage in the GIS (gas insulated switchgear) equipment at UMC’s facilities on Lixing Road, Hsinchu, resulted in a voltage drop for other fabs located in the surrounding area, according to TrendForce’s latest investigations. Affected foundries include TSMC, Vanguard, and PSMC. However, TrendForce’s investigations also reveal that, apart from the temporary power outage at UMC’s Lixing fabs, facilities operated by TSMC, Vanguard, and PSMC experienced only a temporary voltage drop. While the uninterruptible power supplies of the facilities kicked in shortly after the outage, normal manufacturing operations resumed following certain equipment crashes that occurred during the transition from one power source to another. UMC’s Lixing fab has currently resumed operations after about four hours of power outage, and TrendForce expects the impact from this incident to be minimal.

TrendForce believes that the total production capacity in the affected area accounts for about 20% and 4% of the respective global production capacity of 8-inch wafers and 12-inch wafers. Although the affected area is a strategically significant location of semiconductor production, investigations show that this incident resulted in a mere voltage drop for the immediate surroundings, and the affected parties have resumed operation after making adjustments. As such, their overall production capacities have not been substantially impacted. With regards to UMC, the power outage primarily took place at its Fab 8A(B), which focuses on the 0.25~0.5µm processes mainly used to produce power discretes such as MOSFET, whereas Fab 8C/D, which primarily produces DDIs and PMICs with 0.35~0.11µm processes, sustained minimal impact from the voltage drop. The incident’s impact on UMC is expected to come to less than 1% of the foundry’s yearly revenue, which can be essentially compensated for through hot runs.

TrendForce indicates that UMC manufactures driver ICs (mainly with 8-inch 0.11~0.15µm processes) at Fab 8C/D for certain desktop and notebook monitors. With regards to driver ICs, the power outage incident is expected to have very limited impact on their global supply. However, as large-sized driver ICs have been in shortage since 2H20, this incident may exacerbate the industry-wide panic over the availability of driver ICs, thereby resulting in additional upward momentum ensuring persistent price hikes for large-sized driver ICs and IT display panels. 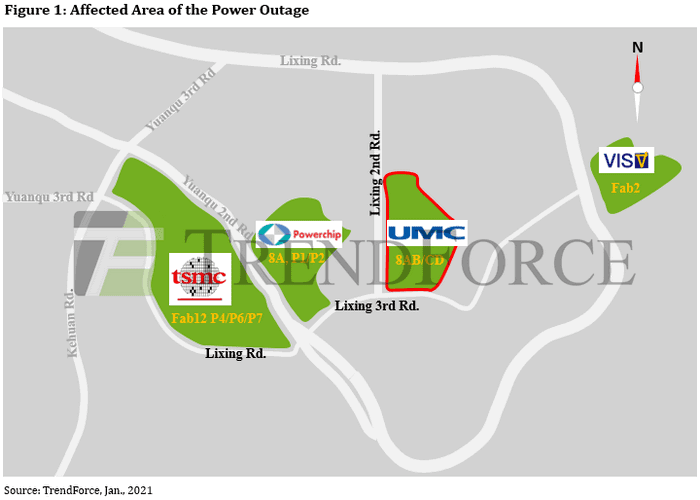